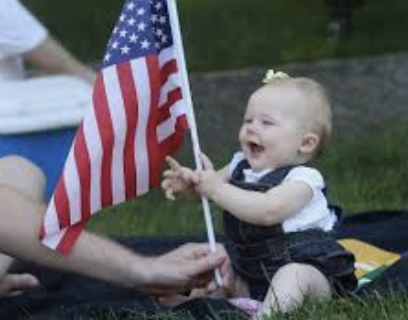 Once upon a time, in a land far away, we were members of a small family-oriented club.  We celebrated most holidays in understated fashion but the Fourth of July was big.  Great big!

For starters, we had our own fire works display!  Family picnics ran the gamut from candles-and-caviar to buckets of Kentucky Fried Chicken.  We played silly games and sang songs and marched to patriotic music, a flag bearer leading the way.

The highlight of the day was the always the baby race.  An oxymoron if ever there was one.

We’d create a circle out of anything that was handy….beach towels, tennis racquets, shoes.  The babies (all under walking age, by virtue of strictly mandated rules) were placed in the middle of the circle and the mothers, from outside the circle, cajoled their babies to come to them.  The first baby to crawl to its mother won something.   What that something might have been doesn’t matter.   What mattered was the pure fun and silliness of the whole thing.

Some babies cried, of course.  Some ate the grass they were sitting on.  Some stared at the sky.  Others sucked their thumbs in bewilderment or tried to cop a toy from the baby sitting next to it.

The “race” was usually called before it was over. The babies, being non-competitive and in no hurry whatsoever, soon lost interest. As did, eventually, the spectators. The event always ended in mutual agreement that there would be no “winner” this year.  Just a bunch of smiling moms, dads, and grandparents. It was all just exactly as it should have been.

Happy Fourth of July to all.

“What Can We Do?”
Scroll to top