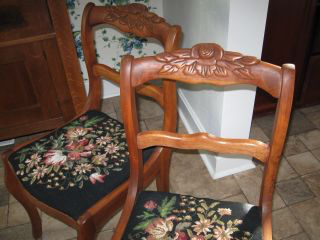 The curtain opens on a sun room with comfortable sofas and chairs and a delicate little rose wood chair, the seat of which my mother had needlepointed. No one ever sat in the chair. It was old and fragile, purely a decorative item. She had made a pair of them.

After her death, the family chose those pieces from her house which they wanted and one of the little chairs came to me.

Not too long after her death, over the course of a week or so, the chair began turning away from the wall.….exactly 90 degrees to the right each time, toward the sun. We didn’t observe those events. We were just aware that the chair was in an odd position. There was no explanation…we tried and tried to come up with something earthly….and finally determined that my mother had to be involved. There was so much of her invested in that chair. Every stitch of the needlepointed seat had come from her hands, of course.   It happened four times. The fifth time we tracked it by going in and out of the room several times, as it turned, slowly but surely, by about 45 degrees. That was its last performance.

The companion chair was here on the island, in our son’s house. They had recently moved it next to a large coffee table with a heavy glass top. They were planning on putting it in the baby’s room, thinking it would be lovely to have something there from my son’s grandmother’s house.

Within a day or two of the chair being next to the table, the glass top shattered…not once but twice. No explanation was available. It had to be my mother again.

No one was thinking that these were positive things. And with a new baby on the way, to be named after me. We had to get rid of them. Too bad….they were pretty little chairs but up to no good.

Then the odors started at night, interrupting deep sleep. Pleasant, powerful, and dense fruity smells. A little difficult to define because they were fleeting….a few seconds and they were gone.   “Oh, it was just your imagination,” you say. You’d be wrong. The odors woke my husband, too. On separate nights, of course. Our research tells us ghosts rarely affect more than one person at a time. Must be in an instruction manual somewhere.

Early on, every time the aromas woke one of us, we searched our minds for earth-bound causes….a new soap, new detergent, perfume, shampoo….anything that might cause the “event”….but always to no avail. Obviously, we discussed the phenomenon between ourselves, trying to make sense of it. It became clear, after a fairly short time, that the “other-worldly” had entered our lives.

(At this point we were, slowly and perhaps a bit dully, putting things together with the chair events. Listen, there aren’t any guidelines to this ghost stuff. You’re on your own and sometimes it takes a while to get with the program!)

The chairs were a no-brainer with regard to my mother. But, how did we relate the fruit odors to her? Well, she was a fruit-a-holic. Peaches particularly. She couldn’t get enough of them.

This went on for over 15 years. Frankly the night visits became so commonplace, we frequently forgot to mention it to each other. We simply accepted her, hoped that she would find peace and in the meantime, welcomed her presence when she chose to be with us.

Before we close the curtain on Act One, there was one more thing that made it clear to us that she was our ghost.

Not only was she a fruit-a-holic, she loved chocolate even more. Back in our first house on the Island, I had a reading chair, just outside the kitchen. One afternoon, a very strong smell…delicious, of course….of brownies being baked emanated from the kitchen. I knew immediately what it was and just enjoyed the aroma. It happened several times. ( She even took her “cooking” skills to my son’s house one morning, much to their surprise and distress, despite my assurances that all would be well.)

One day, my husband walked in while the brownies were being “baked.” Apparently, she decided to share because he was delighted to think that I was actually baking brownies. Needless to say, he was disappointed to learn that they were spectral, not edible.

Next week, I’ll continue the story.   Another character shows up. She only has a cameo role but it was an important one. I’ll introduce you to her.