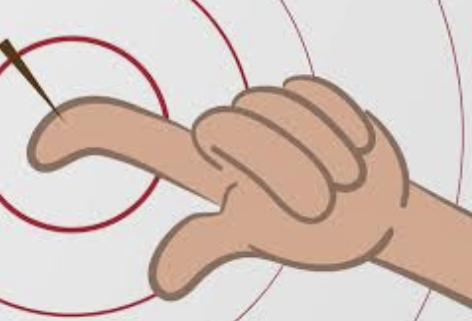 When the children were growing up, scabs, zits and splinters were common afflictions. I wasn’t keen on the scabs or the zits but, oh, those splinters.

I always figured the zits would dry up and the scabs would fall off but splinters needed attention.  Further, they needed MY attention and they needed it right now. Wait right here, I’d say.  Don’t move a muscle.  I’ll just get my needle.

Sometimes the child stayed put for the surgery but more often than not, he took off for parts unknown.  We both knew, however, that the splinter would eventually have to meet its maker.  Splinters don’t just go away by themselves.

I like to think that I had pretty good splinter-removing skills.  Further, it was fun.  At least for me.   I’d gently probe under the skin with the needle, expose the alien body and tweeze it out.  Voila!  I’d say.  See now, that didn’t hurt at all, did it?

There was never full consensus on that issue so I’ve just had to assume, for all these many years, that my splinter skills were good, very good, indeed.  I miss all that.  Oddly enough.

In Search of Our Third Booster.
Scroll to top